Last week I had the honor of participating in and experiencing the 2017 North American James Joyce Conference in the fantastic city of Toronto, Ontario. It was a wonderful time, akin to a Joycean Disneyland with displays of masterful artwork, insightful papers, and music-accompanied performative readings in a chapel (the centrality of the chapel in Finnegans Wake---HCE+ALP in Chapelizod---I don't think was lost on the conference organizers). I'm going to provide a brief recap (as brief as I can make it) here of my experience at the conference while sharing links to the work of some of the participants as an attempt to both digest everything I took in and provide a resource for the world of Joyceans and Wakeans who I know would be interested in some of this stuff.

I was attending the conference to present my paper, "Waging Peace from the Inkbattle House: Finnegans Wake in the Shadow of War," scheduled to be part of the first panel of papers, "Wormholes in the Wake," on the morning of Thursday June 22nd. I didn't realize going into the conference that I'd also find myself making a couple other presentations throughout the week.

(I should quickly note that this was all coming on the heels of a very eventful Bloomsday week back home in Austin. We had our Finnegans Wake Reading Group meeting at Malvern Books on Thursday June 15th, followed by a Bloomsday party on June 16th featuring bibliomantic readings of Ulysses and Finnegans Wake, then an Irish music concert in an arboreal setting with the Here and Now and the Piper Jones Band on Sat June 17th where I was invited to take the stage, discuss Leopold Bloom and Ulysses, and read passages from the text along with a couple other members of our reading group. A great way to get the Joyce momentum rolling prior to the conference.)

The Diasporic Joyce conference officially kicked off on Wednesday June 21st. My new fiancée and I were staying in a charming top-floor apartment a few blocks away from the University of Toronto. We had arrived Tuesday night after spending the afternoon at Niagara Falls where we got engaged (pic below). We had the best time in Canada. I was completely blown away by Toronto, it has to be one of the coolest cities in the world. Architectural brilliance all over, academic excellence, an artistic vibe, and a multicultural mixture so rich that it led our street art tour guide to describe Toronto as "the most multicultural city in the world" because 50% of its residents hail from other countries. 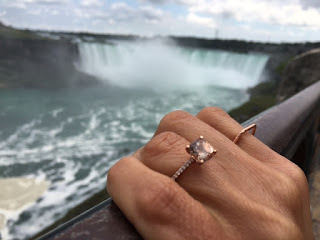 Wednesday afternoon I walked through the busy streets of Toronto (it was a great time to be in Canada, during the 150th anniversary celebration) over to the beautiful Victoria College campus within University of Toronto where the Joyce gathering was being held. The campus of Marshall McLuhan, Donald Theall, Hugh Kenner, Northrop Frye. Walked into the 150-year old Gothic Victoria College doors and immediately saw my friend Robert Brazeau from the University of Alberta. Met two friendly Joyceans one hailing from Iran, the other from Brazil, fellow devout fans of Finnegans Wake, Decio a retired architect Joyce scholar and Madhi an academic in Edmonton. We had a great talk about Joyce's omnitext before going upstairs where the conference organizers had prepared exhibits of some of the Joyce-inspired artwork to be experienced during the conference. Things had barely begun and I was already blown away.

On the walls of a classroom were the jaw-dropping creations of Peter O'Brien who had taken the pages of the Anna Livia Plurabelle chapter of Finnegans Wake and artfully filled them with colorful annotations and illustrations. A physical representation of what the Wake describes as "a speechreading from hisminiated vellum, alfi byrni gamman dealter etcera zezera eacla treacla youghta kaptor lomdom noo, who meaningwhile that illuminatured one, Papyroy of Pepinregn"(FW 568)---papyrus of "illuminatured" vellum palimpsests of all the notes, echoes, resonances, anastomosaic river branchings of ALP. Here are some samples: 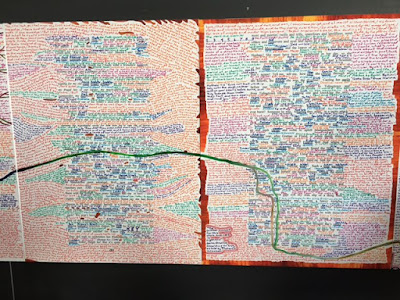 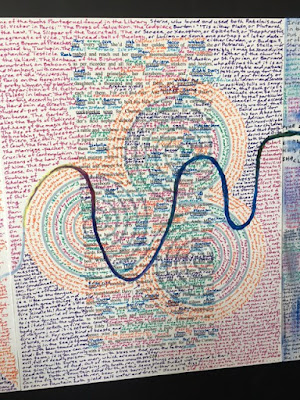 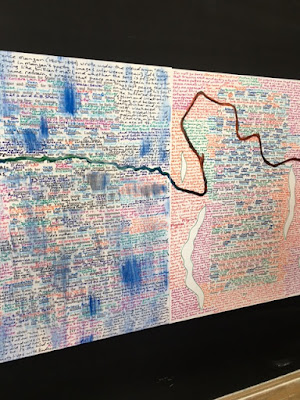 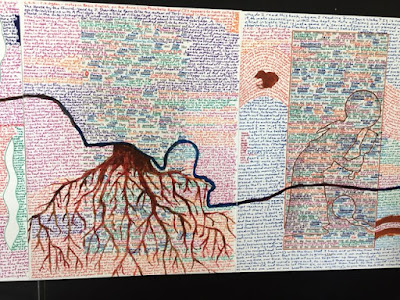 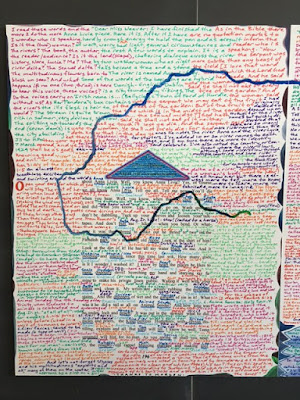 (Peter O'Brien is apparently doing this for every page of the text. I told him I'd love to have an entire book of this. He shared with me a sneak preview of some of the other pages and they're incredible. He's also collecting copies of annotated pages of Finnegans Wake from folks like Marshall McLuhan, Northrop Frye, Michael Groden plus anyone else who's interested in sharing their own personally annotated Wake pages. Send a copy of yours to tpob@me.com.)

The first panel to commence the conference proceedings that Wednesday afternoon somehow found me up there ready to speak off the cuff to a room full of Joyce scholars about my contributions to the Waywords and Meansigns project. This wasn't in the original schedule but my pal Derek Pyle, the W&M mastermind, was a little under the weather and had lost his voice, so I agreed to get up there with him and discuss the project. Managed to articulate a few words about the creation of the "Yawn Under Inquest" chapter for the first edition of Waywords (which can be heard here and read about here). The rest of that panel featured one talented artist after another sharing their Joyce-inspired work (plus the digital design brilliance of Boston College students who'd crafted a virtual reality rendition of scenes from Ulysses, Martello Tower, 7 Eccles Street, Sandymount, etc). Tasha Lewis detailed how she created collage illustrations for each page of Ulysses with different styles for the 18 episodes over 8 weeks of intense creative effort, leading to her enormous book Illustrating James Joyce's Ulysses in Eight Weeks. She: Illustrated. Every... single...page...of Ulysses! 644 illustrations each inspired by a certain passage from the text. The New Yorker celebrated it and Tasha deserves an art achievement award of some kind. Another gifted collage artist, Heather Ryan Kelley, shared an enticing little black cube called The Midden Heap Project containing booklets of abstractly illustrated episodes from Finnegans Wake, namely these:

Peter O'Brien talked about his aforementioned arabesques of annotations on the pages of ALP and amusingly shared his passion for Joyce (mentioning this important video clip), as did Robert Amos who somehow stole the show with his stunning calligraphic renditions of Joyce quotes either etched on the furniture of the James Joyce Bistro in Victoria, BC or rendered in the style of Japanese paintings. He's currently working on an illustrated version of Eric McLuhan's landmark study on The Role of Thunder in Finnegans Wake (!!!) and once recorded himself reciting the entirety of Finnegans Wake. I can confirm he is a precise and humorous reader of the text. (Check out Robert's own recap of the Toronto Joyce Conference here.) 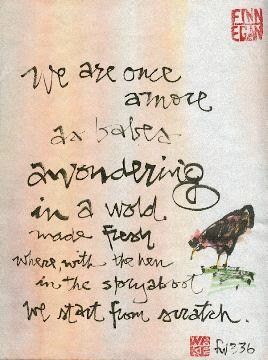 By now, having overcome sweaty anxiety to speak to a room full of people and subsequently absorbed the mind-blowing, stunning artwork of one master creator after another, I was gassed. A quick breather preceded the next session featuring the unveiling of a piece from Adam Harvey's new film 'Shemsong,' an interactive textual animation featuring Adam's performance of the Shem chapter delivered over the music of Mike Watt. Former Disney illustrator Bruce Woodside told me Harvey's animated reading "strikes me as one of the best [animated efforts] to date" and it is indeed incredible, see for yourself: