What is Finnegans Wake? A Simulacrum of the Globe (Part 1)

Out of all the alternative theories about Finnegans Wake you can find out there, few are more unique and compelling than this one.

In an essay for the Hypermedia Joyce Studies journal from 2007 entitled "Joyce, Liberature and Writing of the Book," a Joyce scholar from Poland named Katarzyna Bazarnik unveils an entirely new perspective of Joyce's cryptic magnum opus, arguing that the physical text itself was intentionally constructed to be a sort of simulacrum for our earthly globe.

Bazarnik lays out her theory persuasively, beginning by discussing Joyce's history of carefully crafting all of his works to achieve certain meaningful results in the final physical presentation. This tendency goes as far back as his 1914 collection of poems, Giacomo Joyce, which Richard Ellmann felt "could not be properly appreciated without resorting to its actual, physical form." Ellmann was convinced that "the appearance of the work on the page may have become an element of its substance."

Similar intentions are evident in the composition of Ulysses whose text Joyce constantly added onto and tinkered with until the very last minute, resulting in a range of Joycean correspondences such as:


on page 77 “Seventh heaven” was inserted as the seventh sentence in a paragraph where Bloom muses on what people feel taking the holy communion. On page 88 Joyce added: “Aged 88 after a long and tedious illness” to an obituary Bloom is scanning. When Bloom is thinking about weight, gravity, and the rate of falling bodies, he recalls its value: “thirty two feet per second”, in the thirty-second sentence of the paragraph. And in “Calypso” the punctuation of Milly’s letter was so modified as to contain fifteen sentences. Bloom was struck by a coincidence between Milly turning fifteen on the fifteenth of June, the day she wrote the letter...
If one pursued such numerology further, one could notice that the first edition of the novel counts 732 pages. This is the number of nights and days in the leap year; coincidentally, 1904, when Ulysses is set, was a leap year, too. Besides, the diurnal and nocturnal halves of the book are equal: the dawn falls exactly on pages 364-5. “Done half by design” thinks Bloom at that moment, reflecting on the shape of the Dublin Bay.

Many of these little synchronicities are preserved only in the original 1922 text as all subsequent editions included enough additions and modifications to collapse these hidden little houses of cards.

Thankfully, in the case of Finnegans Wake the same pagination has been preserved from the original 1939 publication giving us a chance to pick apart Joyce's astounding structural engineering.

Bazarnik argues that since the Wake describes itself as “the book of Doublends Jined” (FW 20.16) or double ends joined, "we can visualise it as a book opened in such a way that its covers are joined, while its radially extending pages form a circle." This linking of front and back was confirmed, in Bazarnik's view, by the design of the first edition which bore the same lettering on the front and back covers, not to mention the final uncompleted sentence linking to the opening line of the book. 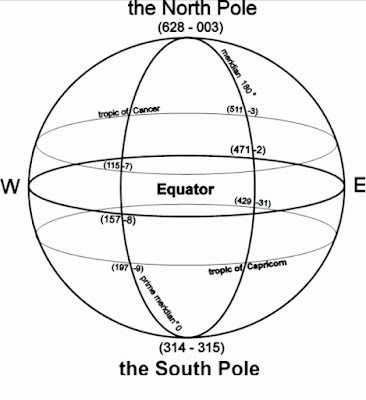 This diagram is the most fascinating visual representation of Finnegans Wake I've encountered aside from John Bishop's relief maps in Joyce's Book of the Dark. I find her theory absolutely stunning. Bazarnik points to a number of references to various polar regions appearing around pages 627, 628, 3, and 4 while in the middle of the text (the South Pole on the map) appear references to a bunch of polar explorers and vessels.

She even offers an entirely new viewpoint for the mysterious clustering of particular languages appearing throughout the text, noting specific languages and references appearing in alignment with the Tropic of Cancer or the Tropic of Capricorn on the globe diagram. Many of these appearances, she emphasizes, were added in the later stages of composition including this apparent reference to the cartographic character of ALP's letter: "But once done, dealt and delivered, tattat, you’re on the map. Rased on traumscrapt from Maston, Boss. After rounding his world of ancient days." (FW 623.29-624.01)

Another late modification was to replace the word "geographical" with "geodetic" emphasizing the book's embodiment of the branch of mathematics dealing with the shape and area of the earth. This change was made on page 114 in the middle of a chapter describing the curious nature of Finnegans Wake itself:


One cannot help noticing that rather more than half of the lines run north-south in the Nemzes and Bukarahast directions while the others go west-east in search from Maliziies with Bulgarad for, tiny tot though it looks when schtschupnistling alongside other incunabula, it has its cardinal points for all that... It is seriously believed by some that the intention may have been geodetic. (FW 114.02-114.15)

She closes by quoting Clive Hart from his book Structure and Motif in Finnegans Wake where he clearly picked up on the same thing writing on pg 111: "The 'intention may have been geodetic' indeed. Finnegans Wake is laid out like a map of the globe---'a chart expanded' (593.19)---for geography is as important to Joyce as history."

No wonder Joyce considered himself the greatest engineer who ever lived.

This theory goes along quite nicely with the similarly mind-blowing idea put forth by Joyce scholar Roy Benjamin in a recent James Joyce Quarterly article about the precession of the equinoxes in Finnegans Wake.

We will dig into that in Part 2.

(Credit is owed to the Finnegans Awake Tumblr page which first alerted me to this article.)
Posted by PQ at 3:51 PM 8 comments: