A Multimedia Examination of "The Mime of Mick, Nick, and the Maggies"

As the massive glittering galactic dream of Finnegans Wake proceeds along, its universal sleeper falling deeper into unconsciousness, the book's content becomes darker, denser, deeper until we reach the most difficult (and multi-allusive) chapters at the very center. As dawn grows nearer, the book grows a little bit lighter until the gorgeous poetic prose of the early morning hours represented in the final chapter.

The first chapter of Book II sets off a stream of difficult but resplendent material with a detailed playbill for "The Mime of Mick, Nick, and the Maggies" (p. 219) featuring all of the book's characters putting on a show in the "Feenichts Playhouse". The play revolves around the children of the book: Mick (the twin brother Shaun representing the Archangel Michael), Nick (twin brother Shem representing Lucifer or the Devil), and the Maggies (little sister Issy and her friends, representing the colors of the rainbow). The playbill promises to enact "a Magnificent Transformation Scene showing the Radium Wedding of Neid and Moorning and the Dawn of Peace, Pure, Perfect and Perpetual, Waking the Weary of the World" (p. 222), a sentence which sounds like a promotion for the Wake in its entirety.

Glossing The Wake Through Two Pictures

During some pretty idle and aimless book perusing and internet browsing I came across two images which I decided are good illustrations of important elements in Finnegans Wake. A saying goes that if a picture is worth a thousand words then a symbol is worth a thousand pictures. Let's take a brief look at how these two symbolic pictures sum up massive pieces of the Wake. 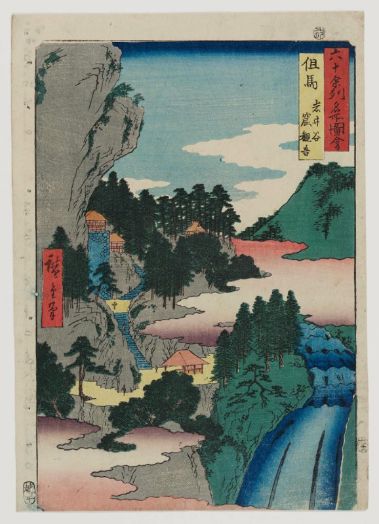 This is a woodcut by Japanese artist Utagawa Hiroshige from 1853. In imagining the recurring "characters" of Finnegans Wake, a family of five (sort of), I've found that it helps to maintain the idea of these figures as morphogenetic organic elements, not as individual people. A seemingly simple nature scene such as this one then manages to serve as a family portrait when you consider each character's earthly element:

That's entirely what's represented in that picture. "Because it's run on the mountain and river system" (FW 288.F3). If you want to count the image in the Wake of the Chapelizod pub in which this "family" sleeps you can even find some little buildings in there.

This next one is both simpler in its representation and more difficult in concluding what exactly it means in the Wake.

Pretty familiar scene there. What's it got to do with the Wake?

From first page to last, Finnegans Wake is positively loaded with rainbows. The entirety of the 1st chapter in Book II, the stage play of "The Mime of Mick, Nick, and the Maggies" (the enactment of "a rainborne pamtomomiom" as p. 285 describes it) frequently features the seven colors with a dance of the seven rainbow girls who are described in endlessly varying names which always refer to the seven colors, as in "Rose, Sevilla ... Cintronelle ... Esmeralde, Pervinca ... Indra ...Viola" (p. 223) or, spelling out the acronym RAYNBOW on pg. 226:

Page 247 has the line "Split the hvide and aye seize heaven!" which indicates splitting the white (Danish "hvide") so the eye sees seven colors.

In the final chapter of the book, there's a debate between Bishop Berkeley and St. Patrick revolving around light and the visible universe in which the druid Berkeley refers to "the his heptachromatic sevenhued septicoloured roranyellgreenlindigan" (p. 611). There are many interpretations as to the importance and meaning of the recurring rainbows and Joyce himself indicated in his letters that the book features an elaborately developed theory of colors. John Bishop in his outstanding study Joyce's Book of the Dark devotes a lengthy chapter (entitled "Meoptics") to exploring the idea that the Wake's play of colors represents visions streaming across the inside surface of the eyelids of the sleeping person within whose body (Bishop argues convincingly) the whole book takes place. In the midst of his exegesis, we're led to some very intriguing considerations of the human eye, a fleshy filmscreen and projector. (I'll have lots more to say about Bishop's great book and his unique ideas very soon.)

Coming back to the organic scene from the first picture, I'm led to think about the bright white light of the sun interacting with the waters of the river mother evaporating into mist and daughter clouds whose raindrops bend light into rainbows, the rain eventually falling down the slopes of a mountain and turning back into a river ("Because it's run on the mountain and river system" FW288.F3). I could also start talking about the Wake's recurring use of the word "heliotrope" and moving towards the sun but I'll stop here...