"The Broken Window of My Soul": Joyce's Horrific Eye Troubles 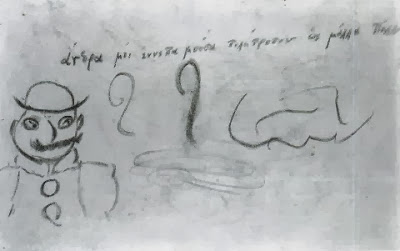 This hand-drawn pencil sketch of Leopold Bloom done by James Joyce himself has been familiar to me for a little while but I recently learned the fascinating story behind it thanks to a post over at OpenCulture.com.


After his seventh eye operation on December 5, 1925, according to Gordon Bowker in James Joyce: A New Biography, Joyce was “unable to see lights, suffering continual pain from the operation, weeping oceans of tears, highly nervous, and unable to think straight. He was now dependent on kind people to see him across the road and hail taxis for him. All day, he lay on a couch in a state of complete depression, wanting to work but quite unable to do so.”
In early 1926, Joyce’s sight was improving a little in one eye. It was about this time (January 1926, according to one source) that Joyce paid a visit to his friend Myron C. Nutting, an American painter who had a studio in the Montparnasse section of Paris. To demonstrate his improving vision, Joyce picked up a thick black pencil and made a few squiggles on a sheet of paper, along with a caricature of a mischievous man in a bowler hat and a wide mustache–Leopold Bloom, the protagonist of Ulysses. Next to Bloom, Joyce wrote in Greek... the opening passage  of Homer’s Odyssey: “Tell me, muse, of that man of many turns, who wandered far and wide.”


The famous Bloom sketch, it turns out, was drawn so Joyce could prove he was able to see out of his badly damaged eyes.

One of the things that fascinates me most about Finnegans Wake is the story of its creation. Joyce labored intensely on what he considered his magnum opus for 17 years, during which time both his daughter and his son's wife suffered mental breakdowns, most of his supporters accused him of wasting his talent or losing his mind, Ulysses (though it received lavish praise from most critics) was confiscated, burned and banned in English speaking countries, and worst of all, he suffered terribly through numerous diseases of his eyes, undergoing more than ten surgeries to try to alleviate the issues.

For most of the time he worked on Finnegans Wake he was basically blind, peering out of a little sliver of sight in one eye. He wrote much of it using crayons, writing with huge letters on large, colored cards. "What are you doing with all those cards?" his wife would ask, to which he answered "Trying to create a masterpiece."

The eye troubles he suffered are so incredibly gruesome that they garner further elaboration. The most concise summation I've come across is from a footnote in John Bishop's superb Joyce's Book of the Dark (which I will have a full review for soon). WARNING: This material is extremely gruesome, horrific, and cringe-inducing. It will probably make your eyes hurt just reading about it.

From a footnote on page 433 of Bishop's book:


No single problem made Joyce's eye operations, most of them on the left eye, necessary. With varying constancy between 1917 and 1941, he suffered from glaucoma, synecchia, iritis, conjunctivitis, episclerotis, retinal atrophy, and primary, secondary, and tertiary cataracts---all of them painful and incapacitating disease whose gravity and scariness no healthy-sighted person should underestimate. Iritis, in early stages it is said to give the sufferer the sensation of having gritty sand in the eye, and so it forces him into incessant, involuntary tearing and blinking whose unrelieving effect is only to exacerbate the condition. Closing the eye, far from relieving the pain, deepens it, and in severe cases, the pain radiates into the brow, the nose, the cheek, and the teeth, ultimately to bring on severe headaches (see Letters, III, 113-14). While sand can be washed out of the eye, iritis cannot. It either goes away or it doesn't, and in the latter case it can spread. Left untreated, it can ravage the affected eye entirely and overtake the second by "sympathetic infection." Advanced cases of iritis were "cured," in Joyce's day, by removing the entire eyeball. Hence the earliest of Joyce's eye operations: an iridectomy on the right eye (his "good eye") in 1917 was followed by two iridectomies on the left ("the broken window of my soul" [Letters, III, 111]).

The "cures" seems as painful as the affliction. Joyce would have been conscious during these operations, his eyelid forced back and held open with a speculum, his eyeball grasped with a pair of forceps to prevent any involuntary flinching. He would have "seen" the surgical knife, razored on both edges to allow the doctor a minimum of movement, approach his cornea and cut its way, with a sawing motion, through to the anterior chamber and then into the iris, where its work would have been to slice out any infected tissue. Joyce would have undergone in reality, in short, a kind of horror conceived in a film like Un Chien Andalou to be surreal. And he would also have had occasion, during these procedures, to consider how objects can enter the eye of a subject in ways not usually explored in Newtonian or Helmholtzian treatments of optics.

Reading that always makes me appreciate Finnegans Wake a little more for the unyielding dedication he had to completing this strange work, even while tortured by pains as rough as you can fathom. Of course, barely two years after the Wake was finally completed and published, Joyce was suffering badly from a stomach ulcer, underwent surgery to repair it, and died during the surgery. He'd put everything he had into completing a book that baffled or frustrated just about everyone who tried to read it.

Adding some intrigue to the story of Joyce's eye issues is a passage in Robert Anton Wilson's book Quantum Psychology. In discussing self-fulfilling prophecies, psychosomatics, and the power of suggestion, Wilson speculates on the possible psychological origin of Joyce's eye trouble. From pages 127-28:


Readers of James Joyce's Portrait of the Artist as a Young Man will recall the horrific opening scene, in which the child, Stephen Dedalus, becomes thoroughly terrified by a superstitious servant, who tells the boy that if he does not apologize for some unspecified "sin", eagles will come and pull out his eyes. Stephen hides under the table while the threat, with its awkward and unintentional rhyme, pounds through his mind: Pull out his eyes/ Apologize/ Apologize/ Pull out his eyes...

Joyce scholars regard this sequence as autobiographical...

When Joyce began to write novels revealing the sexual side of Irish Catholic life---the Great Unspoken Secret in that country---he became the target of a campaign of vilification almost without parallel in literary history. His eyes began to bother him. He went from one eye specialist to another, and never achieved more than temporary relief. One of the eye specialists said Joyce's problem had psychological roots, but offered no suggestions about how to reach and remove those roots. Others resorted to the knife. Joyce underwent eleven painful eye operations in seventeen years, and became "legally blind" although not "medically blind" toward the end of his life.

The fact that Joyce put the eagle/eye story at the beginning of his most autobiographical novel indicates that, on some level, he understood the "curse" that had been laid on him. It appears that, like the Polynesian tribesman victimised by the death-bone, Joyce could not resist the "curse"---despite his agnosticism and skepticism. This perhaps indicates the degree of our malleability during those sensitive moments that ethologists call points of imprint vulnerability. And it may also indicate Joyce's awareness of the pain his books caused to pious Catholics. (He never did apologize...)