It's been quite a year for our Finnegans Wake Reading Group here in Austin.

We've experienced significant growth, with new members showing up to almost every meeting. We've spent most of the year studying my favorite chapter, Book IV, taking it very slowly to absorb as much of the meanings and references as we can. In July, myself and another member of our group were on stage with the Austin Classical Guitar Orchestra at the Blanton Auditorium reciting passages from the Wake in front of a couple hundred people (after which I was handed the mic and answered questions from the crowd). And most recently, partly as a result of the attention the orchestra show received, we've built a relationship with the Irish Consulate here in Austin, TX.

Last night we had our first ever meeting at the Irish Consulate with the Consulate General himself, Mr. Adrian Farrell, taking part in our regular hermeneutic routine. Was great to have an Irishman and Dublin native sharing his reflections on the text with us. 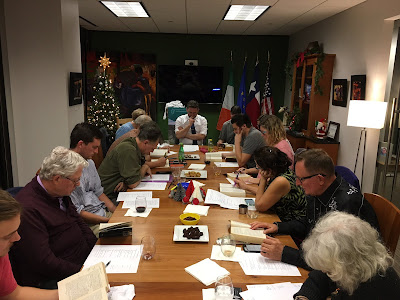 Fittingly for studying a synchronicity-laden text consisting of 17 chapters, the Consulate is located on the 17th floor and we were reading from the 17th chapter. Another amusing resonance among many that occurred on the evening: our circular recitative reading leading to the question "This Mister Ireland?" (FW 608.14) being asked aloud by readers sitting directly adjacent to the Irish Consulate General.

The page was ripe with gems. In the group's 4-year history, the standard has always been for us to read and decipher 2 pages in each meeting but once we entered Book IV we had to narrow our focus down to 1 page at a time. Last night's page was a prime example. You could unpack that one page for weeks. We spent a solid 2 hours on it, the essence of the text revealing itself bit by bit until a eureka moment toward the end. (This is the typical pattern of a Wake group meeting.) (A little bit of Jameson, courtesy of the Consulate, served to enhance our enjoyment.)

In the opening paragraph, amid the fog of dawn, Joyce toys with ironic puns combining references to the skepticism of science with the sorcery of summoning spirits of the dead in a séance: "It is a mere mienerism of this vague of visibilities, mark you, as accorded to by moisturologist of the Brehons Assorceration for the advauncement of scayence..." Love that word "scayence" (science + séance).

The fog of sleep is gradually lifting and what we're left with is the family of core symbols or sigla, the foundational archetypes whose endless permutations fill the pages of Joyce's book. We get descriptions of those symbols, the same ones that appear on pg 299 as "The Doodles Family." (You can read all about the sigla here.)  Consideration of the sigla, the core building blocks of the Wake's universe constituting a family of elements, led to discussion of the I-Ching. Once that cat was out of the bag, we discovered clear reference to the I-Ching on the page and then my head officially exploded. The ensuing discoveries warrant their own blog post in the future.

My favorite part of the text, the sentence that I'll be chewing on for days, came towards the end:

In the wake of the blackshape, Nattenden Sorte; whenat, hindled firth and hundled furth, the week of wakes is out and over; as a wick weak woking from ennemberable Ashias unto fierce force fuming, temtem tamtam, the Phoenican wakes.


In the wake of the black ship, (named) "Dark Coming On" (see Fweet); when, kindled fire and hurdled forward, the week of wakes is out and over; (and here's the best part:) as a weak wick waking from in-emberable ashes unto fierce force fuming... the Phoenix-Finnegan wakes!

The "temtem tamtam" as a sound is a recurring motif in the Wake, also kinda sounds like the flickerings of a flame coming to life. "Tem" could be Tim as in Tim Finnegan, the hod carrier at the heart of the "Finnegan's Wake" ballad. Tem is also apparently the creator god in the Egyptian Book of the Dead where he's said to "comest forth from the Great Deep."

Say that slowly a few times.


(Immense debt of gratitude is owed to the Irish Consulate and Adrian Farrell for being so welcoming and hospitable to us. Also I raise my glass to the MVP of the Consulate gathering, Evan James, who not only designed and screenprinted awesome t-shirts for the Finnegans Wake Reading Group of Austin, but made the long drive down from Dallas to deliver the goods and partake in the gathering.)
Posted by PQ at 10:21 PM 2 comments: