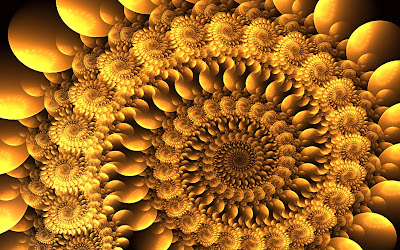 While constructing Finnegans Wake, James Joyce boasted, "I am really one of the greatest engineers, if not the greatest, in the world."

In studying the intricate designs of the Wake, one realizes this statement applies to many different aspects of it. The book is a living machine, cranking out fresh meanings, references, and connections every time you engage with it. It was published nearly 80 years ago yet somehow its material can always apply to the present day.

It was also, as I've written about recently, engineered as a rotating reconstruction of the Earth.

And its entire framework, from the most minor details to the overriding structure, is fractal. Devoted Wake-heads have always been aware of this, but now some physicists and mathematicians examining literature have confirmed the Wake's fractal fabric.

“The absolute record in terms of multifractality turned out to be Finnegans Wake by James Joyce. The results of our analysis of this text are virtually indistinguishable from ideal, purely mathematical multifractals,” said Professor Stanisław Drożdż, another author of the paper, which has just been published in the computer science journal Information Sciences."


fractal (n) - a curve or geometric figure, each part of which has the same statistical character as the whole. Fractals are useful in modeling structures (such as eroded coastlines or snowflakes) in which similar patterns recur at progressively smaller scales, and in describing partly random or chaotic phenomena such as crystal growth, fluid turbulence, and galaxy formation.

"find, if you are not literally cooefficient, how minney combinaisies and permutandies can be played on the international surd!" - FW p. 284

What is Finnegans Wake? A Simulacrum of the Globe (Part 2)

Further reinforcing the astounding idea that James Joyce constructed the physical text of Finnegans Wake as a simulacrum of the earthly globe is Roy Benjamin's theory expounded in his excellent article "What Era’s O’ering?: The Precession of the Equinoxes in Finnegans Wake" (from James Joyce Quarterly Vol. 48.1*) where he argues that the Precession of the Equinoxes and the ancient myths revolving around this phenomenon play a central role in the Wake.

It appears that Joyce not only shaped the whole of his book in the form of the spherical earth, he made sure to set it in motion, "whirled without end to end" (FW 582.20) amid the glistening theater of constellations. So accurately did he render its spin that even the earth's slight wobble, like "the spin of a coin" (FW 127.14) or "the spin of the top" (FW 163.18), and the resultant celestial re-positioning that ensues over millennia are featured in his simulacrum.

Remember, Joyce literally put painstaking effort into constructing his works down to the most minute details, especially Finnegans Wake. John Bishop calls it "the single most intentionally crafted literary artefact that our culture has produced." (I cannot refer to that statement enough.) This was not by accident. It's been 75 years since its publication and scholars are still uncovering new forms in its fractal latticework.

Email ThisBlogThis!Share to TwitterShare to FacebookShare to Pinterest
Labels: creation of FW, interpretation, what is FW?

Finn Awakens: The Influence of Finnegans Wake on Star Wars 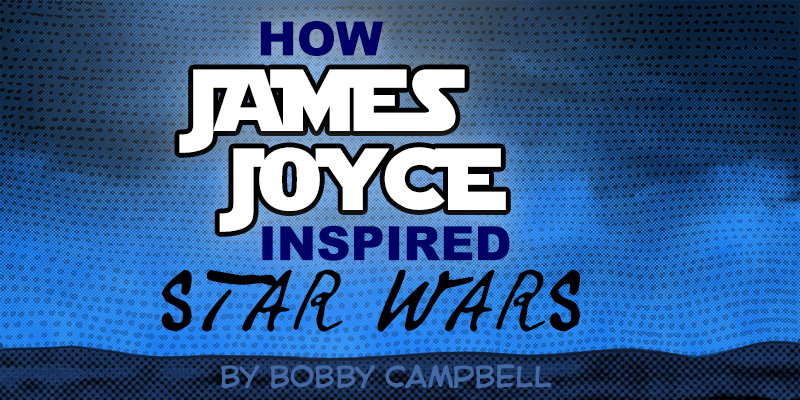 Be sure to go check out eminent illustrator and Joycean Bobby Campbell's newest blog post connecting the dots between Finnegans Wake and Star Wars.


The latest installment in the Star Wars saga, Episode VII, includes 2 potential high-profile references to the monomythic source material. The episode title The Force Awakens is a pretty simple jump from Finnegans Wake, and it’s an even smaller leap of logic to Finn, the stormtrooper turned rebel hero. Of course, these may be merely coincidental creative decisions, but it’d be cooler if they weren’t!

In the world of Wakean synchronicities and bizarre anachronisms, these are completely valid observations. Somehow Finnegans Wake is always current, "as modern as tomorrow afternoon" (FW p. 309).

An alternate title for the new Star Wars film could have been Finn Awakens.

The main criticism being lodged against the new film is that it essentially repeats the story of the very first Star Wars installment. This is reminiscent of what's going on in Finnegans Wake where the same story with the same essential players or archetypes is told and retold in different versions of the same thing, "one thousand and one stories, all told, of the same." (FW p. 5)

The theme of the younger generation taking over from their elders is also a prominent feature of The Force Awakens and is a core theme in Finnegans Wake where the sons unite to topple their father.

(SPOILER ALERT: The final scene of The Force Awakens also takes place on an island off the coast of Ireland.)