During our last Finnegans Wake Reading Group meeting here in Austin we covered what is no doubt one of the more fascinating pages of the Wake, coming at the conclusion of Chapter 5 (Book I) which discusses in myriad detail the exotically inscribed letter dug up out of a garbage heap by a hen and now being examined by all kinds of archaeologists, scholars and forensic experts. This letter, "a polyhedron of scripture" (p. 107), a "radiooscillating epiepistle" (p. 108) written in "anythongue athall" (p. 117) and considered to contain "as human a little story as paper could well carry" (p. 115) is, of course, representing Finnegans Wake itself.

It's the first chapter we dug into for the group, chosen because it serves perfectly as an introduction to the text as it frequently describes the nature of the Wake, stressing the need for "penelopean patience" (p. 123) for a reader perusing its "toomuchness, the fartoomanyness" (p. 122) in which every word is "as cunningly hidden in its maze of confused drapery as a fieldmouse in a nest of coloured ribbons" (p. 120). At one point the book frankly asks the reader, "You is feeling like you was lost in the bush, boy? You says: It is a puling sample jungle of woods" (p. 112).

In examining the letter we manage to go through the whole history of writing, paper, manuscripts, printing, etc. as we study the palimpsest-like document which "has acquired accretions of terricious matter whilst loitering in the past" (p. 114). Direct comparisons are made to the Book of Kells (especially its so-called Tunc page), another exhumed text whose pages are densely packed with intricate details and arabesques.

As the chapter approaches its conclusion, an expert breaks out "his dectroscophonious photosensition under suprasonic light control" (p. 123) to closely examine the "debts and dishes" or dots and dashes of this "new book of Morses" and we soon witness some of the most textually strange lines of any book ever made. We are told that "The original document was in... unbrookable script, that is to say, it showed no signs of punctuation of any sort." This led to interesting interpretation and discussion at the meeting as we considered what exactly is punctuation? Little symbols inserted in text to break up its flow, generally agreed upon signs that are there to direct literary traffic.

Getting the easy part out of the way, the first phrase uses broken text in a hilarious manner to depict "bits of broken glass and split china." The rest of it was marinated on for a while among the meeting participants. The notion of breakfast is popular throughout the book as the sleeping hero will soon Wake to break his fast, probably with a fork. Joyce also seems to mock the "grave" serious professors who would no doubt comb his book's pages missing the important element of humor.

Considering the medium of writing, to carve streams of symbols or letters across the space of a page is to "introduce a notion of time upon a plane surface." What is, of course, most stunning here is the appearance of the word "iSpace" which sounds perfectly like an Apple product that Joyce is describing in a book published in 1939. It's one of the book's most blatant examples of puncturing holes ("punct!") in time and space, momentarily poking its head deep into the future.

I'm happy to say that after only 5 months, the Wake group here in Austin has already attracted some very colorfully minded folks with interesting approaches to unraveling streams of meaning out of the buzzing, lively words of the Wake. One participant sent me her further thoughts upon reflecting on the iSpace theme and they really perfectly represent the kind of creative exegetical brainstorming that I hope to incite through this group, so I will close with those words:


I-space is internal space, as in the interior life, the dream state, the void, the womb, or the undifferentiated space of the spirit of God over the waters in Genesis. The pronged instrument of the fork is literally a fork (two paths) signifying differentiation or duality, good and evil, male and female, the two brothers in FW. The pronged instrument is also phallic (in the procreative act) or the writer’s pen (in the creative act) which “punctures” the page, or creates meanings through punctuation (note that Tunc is contained in punctuate), making order out of chaos. The fork of the “grave” Brofesor is the spirit of inquiry, like the Tree of the Knowledge of Good and Evil in the Garden of Eden. The I-space of unknowing is punctured by knowing: the dreamer awakes, the innocence of the Garden is ruptured, the amniotic sac tears and there is birth. There’s a pun on the word “grave”, i.e., death punctures life, Adam and Eve’s inquiry produced death. You could also say that coming into being punctures the void. Of course FW is a wake, which is both a funeral (death) and waking up. The circularity of FW is punctured by choosing to read the work in a certain order or by attributing meanings to the words. Also, Shem is “Shame”- Adam and Eve’s shame in the dualistic/differentiated/knowing state.

Email ThisBlogThis!Share to TwitterShare to FacebookShare to Pinterest
Labels: interpretation

As this brand new blog continues to take shape, a sidebar filled with links to great material on the Wake throughout the Web has now been added. Here is an overview of what these links are all about.

Joyce Reading ALP
This is a must for anyone thinking of taking a dive through the pages of FW. From 1929, this recording features James Joyce himself mellifluously reciting the final three pages (p. 213-216) of the watery ALP chapter, the chapter on which he was "prepared to stake everything." About these pages, he once wrote, "either the end [of this chapter] is something, or I am an imbecile in my judgment of language." James Stephens called it "the greatest prose ever written by a man."

FW full audio
Unfortunately, Joyce himself only ever recorded those few pages above, but a few people have recorded this most aural of books in full. Dublin-born Patrick Healy has a particularly interesting angle to his reading (available at UbuWeb in its entirety for FREE), I was especially intrigued by his rendition of the "Night Lessons" chapter (p. 260-308) which features footnotes and marginal scribbles on every page. When I recently read the Wake cover to cover, this audio reading was absolutely essential to the experience.

Email ThisBlogThis!Share to TwitterShare to FacebookShare to Pinterest
Labels: links

What is Finnegans Wake?

This could easily end up being a regular series. From the intro to Finn Fordham's book Lots of Fun at Finnegans Wake: Unraveling Universals comes this massive collage (mimicking the Wake's penchant for long lists) of the various ways Joyce's masterpiece has been described, both by critics and commentators and even by the book itself. Finnegans Wake is...

a sleep-story; the dreamlike saga of guilt-stained, evolving humanity; a protracted nightmare; a mighty allegory of the fall and resurrection of mankind; a gigantic epiphany of mankind; an ark to contain all human myths and types; a chaosmos of Alle; a polyhedron of scripture; a meanderthalltale; this nonday diary, this allnight's newseryreel; one of the boldest books ever written; one of the most entertaining books ever written; one of the greatest works of twentieth-century architecture; nothing short of divine vision or a new cure for the clapp can be worth all [its] circumambient peripherization; enormous, mad, unreadable; a cold pudding of a book; a Wholesale Safety Pun factory; a dull mass of phony folklore; a divertissement philologique; literatured with ... once current puns, quashed quotatoes, messes of mottage; an Irish word ballet; like a little Negro dance; music; a collideorscape; a macroscope; a last judgment and genial proclamation of doom; a monstrous prophecy; a history of the future; a tragi-comedy; funeral and funferall; made out of nothing; a paroxysm of wroughtness; Wimmegame's Fake; a big long wide high deep dense prosework; an encyclopedia of mythology; a postmodern encyclopedia ... a parody of the eleventh Brittanica; unprecedented; seen distantly and from without, like a darkened powerhouse on the skyline; a wheel...and it's all square!; a flying machine; a time machine; a hypermnesiac machine; a cybernetic history machine; a simulacrum of the machinery of God's creation; a millwheeling vicociclometer; the most profoundly antifascist book produced between the two wars; an engagement with the very matter of our being; a war on language; a wonderful game; most.

Email ThisBlogThis!Share to TwitterShare to FacebookShare to Pinterest
Labels: what is FW? 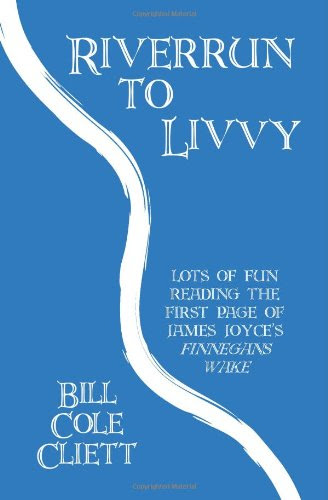 Yes, somebody did write an entire book about the first page of Finnegans Wake.  This should come as no surprise. It's often been said about Joyce's 628-page "nightmaze" that you can pick out any one microcosmic piece and it will contain within it the entirety of the whole structure, very much like a hologram.

The very first page of the Wake (first paragraph even) is extremely dense not only with the weight of multiple meanings/references/allusions contained in each word of text, but in very succintly describing what Finnegans Wake is all about. Consequently, Bill Cole Cliett's excellent book Riverun to Livvy: Lots of Fun Reading the First Page of James Joyce's Finnegans Wake turns out to be a perfect introduction to the phenomenon of the Wake as a whole while also getting deep into studying the minute aspects of one single page. As Cliett writes, "the more I uncovered on the first page the more I understood the entire book, because everything on that page ... relates in one way or another to all the pages that follow."

His book is written very much as a fun, lively, highly readable invitation for the ordinary reader to discover the brilliant (yet largely ignored) masterwork of the 20th century's greatest writer. Assuring us that he's "no scholar, simply a literary layman in love with language and all that words can be made to do," Cliett writes in an approachable manner about an unapproachable book. He's also extremely well-informed. He seems to have read every important study of the Wake published to date and quotes from them often (the bibliography stretches at least 10 pages long) while avoiding footnotes and academic jargon.