When James Joyce went to Africa on a Word-Hunting Safari 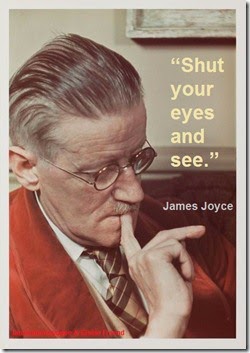 (IMPORTANT PRELIMINARY NOTE: I had some suspicions that this was somehow a fictional account. It didn't seem possible to me that Joyce's many biographers would have overlooked such an unusual expedition undertaken during the peak of his fame in the 1920s. Peter Chrisp, whose Swerve of Shore to Bend of Bay blog is a must-read for Joyce fans, confirmed for me that this was indeed a mental rather than a physical trip to Africa. The biggest clue comes from the essay's opening quote in French which translates to: "What's the good of moving when you can travel so magnificently in a chair?" I was tricked. Nevertheless, it's still a fun story to read.)


In 1924, while in the early stages of drafting, pondering, and scribbling notes for what would eventually become Finnegans Wake, James Joyce made two separate trips to Africa... to go word-hunting.

That's right. Joyce, half blind, ventured to the heart of Africa (twice!) to essentially capture some rare and unique words and languages in a butterfly net.

Joyce scholar Robbert-Jan Henkes writes about this in his essay "James Joyce in Africa: An Expedition to the Sources of the Wake" available in entirety here, but strangely there is no mention of these journeys in any of the Joyce biographies. Henkes' essay appeared in the Genetic Joyce Studies scholarly journal so please be forewarned that the genetic studies folks tend to break things down to the most minute elements as transcripted (often sloppily) in Joyce's notebooks. This also appears to be why nothing about these African word safaris have appeared in Joyce material before, the scholarly community only just recently picked up on it from sifting through his travel notebooks. (See note below.)

Henkes uncovers that Joyce was following in the footsteps of Scottish missionary and linguist Dan Crawford who published two books about his African journeys:


Joyce, on his word-safari, followed the itinerary of the two books of Crawford closely, and he brought home many specimens of ‘black thinking’, 103 from his first trip and another 75 from his second one. And from these specimens, a good many found a place in Finnegans Wake: 24 straight from the travel notes and another 21 via the transcription of the notes by Mme. Raphael in the 1930s, so you could say that the expeditions were fruitful.

Joyce absorbed a great deal of words, phrases, and tribal/native perspectives not only from these journeys but from the reflections contained in Crawford's travel books. The essay notes: "This will be typical of Joyce’s collecting procedure and we will see that during the entire journey he will alternate specimens of African ways of saying with noteworthy expressions from Crawford’s hand." Among his eloquent considerations, Crawford wrote that "night blots out the world to reveal a universe" and one can imagine this idea enhancing Joyce's intentions to devote his new and unformed book to the night world.

Among the lexical specimens Joyce acquired were phrases like "talkingtree" which were the name for trees that had writing carved into them, and "shadowstealer" which is what the natives called photographers. But more tellingly, the blind poet learned the ways of the native people who sleep outside in pitch black darkness surrounded by jungle:


Making his way through the jungle in the direction of Lake Mweru, Joyce was struck by the quantity of fruit on the trees. Not all fruit was edible, but how could you find out? Simple. Crawford: A good old rule I find workable is the eating of any fruit nibbled at by the monkeys.’ After which Joyce noted stenographically: ‘what monkeys eat / Man’. The dense African forest by night was full of sounds, all intimately known to the native. Crawford: “For the hundreds of night-sounds — rustlings, twitterings, raspings, tinglings, and roarings — are all known to even Africa’s tot, the ears being called his ‘eyes of darkness.’” These two poetical observations both made it into the Wake. The night sounds appear in I.4 on FW 095.31, when the ‘fourbottle men’ are discussing how Anna Livia got lost in he woods, and the ear as the eye of the dark is now in I.1 on FW 014.29: ‘lift we our ears, eyes of the darkness from the tome of Liber Lividus’.

The Wake is loaded with references to Africa. Besides containing a multitude of African languages or "darktongues" (FW p. 223)* Shem is called a "Europasianised Afferyank" (p. 191) and Anna Livia Plurabelle "our turfbrown mummy" (FW p. 194) has many African qualities. Sheldon Brivic has a whole chapter devoted to ALP's Africanness in his book Joyce's Waking Women where he states that "her African features proliferate as central determinants of her role." There are also frequent references to the Victoria and Albert Nyanzas, two lakes in Africa believed to be the sources of the Nile River.

*Karl Reisman has written a great deal about "the Affrian Way" (FW p.497) in FW at his blog here.

It is the non-visual, ear-opening perspective I find most intriguing out of all this, though. With Joyce's book of the dark, he really tried to reawaken a pre-industrial, ancient tribal oral tradition, to reawaken the sense of hearing. Simply eyeing the Wake's unconventional and original linguistic constructions certainly has great appeal and could keep a reader coming back to it forever but to hear this bizarre poetry bouncing around through time and space often sounds to me delightfully disorienting. Noted Wake evangelist Marshall McLuhan held the theory that Joyce was preparing us for our cyclical re-entry into tribalism, the electronic global village, through his all-inclusive book of "broken heaventalk" (FW p. 261).

If you could withstand a little scholarly pedantry and minuscule nitpicking, I highly recommend going to check out Henkes' piece. It even has a grainy picture of Joyce in safari gear.
Posted by PQ at 5:03 PM 3 comments: