Links: Finnegan Wakes at Burning Man and the Birth of the Wake in South France 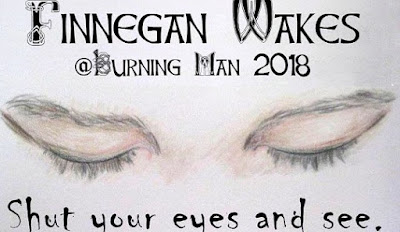 One of the highlights of the International James Joyce Symposium that took place in Antwerp a few months ago was the "Finnegan Wakes" recording project organized by Gavan Kennedy. This ambitious documentary production involves intrepid readers sitting in front of a camera with a musical selection of their choice playing in their ears while they recite a page of Finnegans Wake aloud. Gavan's project sprung up at Burning Man last year and now for this year's (currently ongoing) Burning Man event they will gather burners from all backgrounds to bring the Wake to life.

Gavan wrote a piece for the Burning Man Journal blog describing the project:


Finnegans Wake is a resurrection story: a man presumed dead, laid out at his own funeral (or ‘wake’), is brought to wakefulness by the noise of his mourners as they fight over his reputation. Each time the work is read and wrangled over, the same thing happens: it arises off the page. The performance of every Burner gives birth to new participatory art that wakes Finnegan-again.


This year's event notably features a lecture and a series of workshops given by Finn Fordham, one of the world's foremost scholars on Finnegans Wake. Finn authored the excellent book Lots of Fun at Finnegans Wake: Unraveling Universals and also edited and provided the introduction for the Oxford edition of the Wake. An expert on the genesis and development of Joyce's masterwork, Finn delivered a fascinating presentation in Antwerp on the late stages of the book's production and Joyce's response to the harrowing world events of the late 1930s, while essentially debunking the notion the Joyce had planned to write a subsequent novel, something simple about the sea (instead, as Fordham compellingly suggested, Joyce wanted to write something on the Greek revolution).

The lecture Finn is set to share at Burning Man sounds extremely fascinating from his preview provided in Gavan's article:

What can participating in the great text-machine of Finnegans Wake tell us about the theme of artificial intelligence and the human-machine interface? A great deal, it turns out, because Joyce imagined his work as a machine.

In my talk I will explore this idea of a text as a machine — a machine of memory and of meaning, which seems to have a life and an intelligence of its own. Intelligence can be understood as a consequence of an evolved complex arrangement of matter. We tend to locate intelligence within the bounds of the human body, especially the brain, or mind. But this very intelligence also imagines itself elsewhere: in a thunderclap, a burning bush, a crowd, a termite colony, a computer, a corpse, and also a text — all can seem to have their own intelligence. Joyce was fully aware of such magical thinking.


Hopefully this lecture will be recorded and available online soon.