Rise and Shine: The Dawn Prayers of Book IV (Part 2) 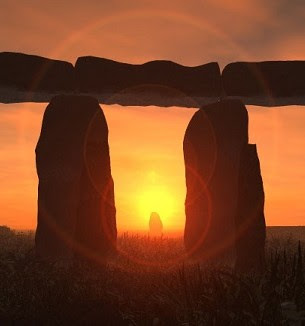 The final paragraph of page 593, in a style mimicking The Egyptian Book of the Dead, declares:

The sun, in the form of an Egyptian priest named "Pu Nuseht" ("The sun up" reversed), now speaks.

What does it say?


93 million miles away from, came one to represent the nation
This is a gathering of the masses that come to pay respect to the Wu-Tang Clan---

Oh wait, that's Wu-Tang Clan wordsmith Masta Killa on "Triumph". The declarations of "tohp triumphant" (FW p. 593) ["tohp" is backward phot- Greek photo meaning "light"] on the other hand, are actually quite similar. "Light is provided through sparks of energy from the mind that travels in rhyme form," Masta Killa waxes. The blind can now see, the darkness has given way to light, and the people are called to unite as one. "Sonne feine" on 593 is Sinn Fein, the Irish slogan "We, Ourselves" fighting for independence, as well as the fine shining sun.

The opening pages of the final chapter in Finnegans Wake are declarations of revolution, simultaneously the uprising of sunlight beginning to clear away darkness and a political uprising of the populace against oppression. The sun is up and it's awakening all Finns, "Calling all downs to dayne" (FW 593), the dawn of a resurrection, the rising of the sun and the people embodied by HCE, "Here Comes Everybody." Page 593, as we found, contains many references to the Easter Rising of 1916, the entire page essentially playing upon the heavily symbolic name of the event and the actual historical occurrence of an Irish revolt. Page 594 continues this theme with "Svadesia salve!" where Svadesia is "self-governing" in Hindustani and "salve" is the salvation of the people, also a healing salve, a renewal of sins and sense with the sun's rise.

We dug into page 594 in a recent Austin Wake reading group and extracted enough material out of just one page to take us beyond our typical two hour meeting time. We could probably study this one page for weeks. It's one long paragraph of exclamations and descriptions of light rays mingling with solar situated monoliths during ancient equinox/solstice ritual celebrations.

There's a lot going on here.

So much that, while these pages are fascinating enough to compel me to compose these posts in the first place, I'm hesitant to try breaking down this page to the same degree I did page 593. This could go on forever. A man has written an entire book about this page.