What is Finnegans Wake? A Mysterious Black Cube

"Joyce's emblem for the book, untitled for years, was □"
- Eric McLuhan

One of my favorite characteristics of the Wake is its self-reflection and self-commentary. While the book describes a set of characters who take on different shapes and forms throughout history (the Earwicker family) it also describes itself as a physical entity and what it represents in history.

The question of "What is Finnegans Wake?" should become a regular series here as there is no single answer. The book even describes itself in various ways. For now, let's focus on the image of the Wake as a black box or cube.

Right from the start, on page 5, "our cubehouse" is mentioned along with multiple references to the story of the Prophet Muhammad, suggesting the image of The Kaabah ("The Cube"), the black cube building in Mecca that is one of the holiest sites in Islam. 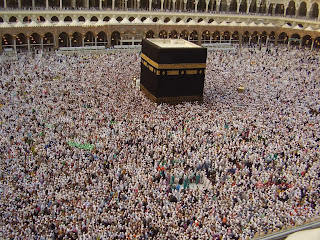 Page 13 has the great phrase "the mujikal chocolat box" suggesting a "musical" black box (the Wake is all about sound, music, awakening the ear) as well as a "magical" box of chocolates, from which ya never know what you're gonna get, exactly as with the Wake which later describes itself as a "beautiful crossmess parzel" (pg. 619) combining Christmas parcel and crossword puzzle.

"kabbaks alicubi on the old house" (p. 34) echoing The Kaabah once more with the sound of "box" and "cube," comes a few lines after the name "Abdullah Gamellaxarksky" appears, Abdullah being the father of Muhammad.

"caabman's shelter" (p. 542) hints at the Kaabah and recalls the cabman's shelter to which Leopold Bloom and Stephen Dedalus go toward the end of Ulysses. The image of a house or shelter also refers to H.C. Earwicker's pub, a place in Chapelizod where the real people (if there are any) exist in Finnegans Wake. Earwicker operates a pub, his family lives and sleeps upstairs.

"the cube of my volumes" (p. 151) is a good description for the medium of the book itself, a voluminous cube. In Joyce's notebooks, and in the Wake (pg. 299) he uses a square hieroglyph to represent the book.

On page 98, "the opulence of his omnibox" and then the recurrence of the word "pillarbox" (pgs. 66, 235, 442) also suggest a coffin, the coffin of Finn or Finnegan (or Osiris) and I think of the clever image on the cover of Roland McHugh's little book The Finnegans Wake Experience: 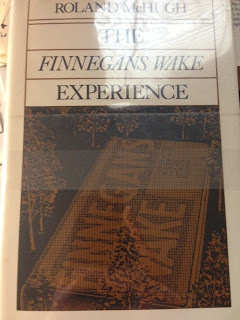 There we see the text of FW itself looking like a giant sepulture in the middle of a forest, waiting for some intrepid archeologists or anthropologists to discover it. (Looking at the image I always think of a quote from Joyce in which he lamented on the Wake: "perhaps in the years to come this work of mine will remain solitary and abandoned, like a temple without believers.")

The cube as representative of the physical book itself is part of the gist of another memorable and meaning-filled line:

There we have the embedded initials of HCE, the "city" (since HCE "weighs a town in himself" p. 132 and embodies Dublin), the "canon" of the book itself and finally that amazing word "tesseract". 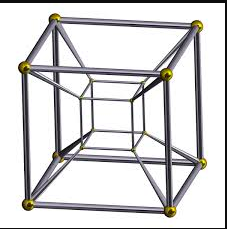 Meditating on this piece of geometry for a little while conjures up vague ideas about time as the fourth dimension and what Joyce was trying to portray with his opaque text written "from severalled their fourdimmansions" (p. 367).

During the composition of the Wake, Joyce used to boast that he'd squared the circle. This gif from wikipedia showing a rotating tesseract might gives us a hint as to what the hell he was talking about:

In my copy of the Wake, I'd drawn a couple strange symbols next to the "tetradomational gazebocroticon" sentence that are essentially squares with spirals spinning in the middle of them. (Joyce once described the Wake as "an engine with only one wheel.") That, to me, is the ultimate symbolic representation of the Wake. But, if we are to take things to higher (hyper) dimensions, that whirling, mesmerizing tesseract would have to be it.

Last but not least, the visual representation of the Wake as a black cube, a mysterious black tablet, certainly seems in alignment with the black monolith of Stanley Kubrick's 2001: A Space Odyssey.

In Kubrick's film, the mysterious monolith is seen as having an important role in the evolution and growth of mankind, moving from violent apes traversing a barren waste land to space explorers venturing through the solar system and beyond. Similarly, the Wake details the evolution of mankind from muttering cavemen groping toward language to the farthest advances of technology, "as modern as tomorrow afternoon" (p. 309), with the Wake itself seen as a futuristic, hyperdimensional cube that somehow contains or mirrors the "monomyth" (p. 581) or formula for human history.

Having identified a mathematical "monomyth" formula, Joyce describes his basic elemental characters being fed through a machine-like device "with a clappercoupling smeltingworks exprogressive process... receives through a portal vein the dialytically separated elements of precedent decomposition for the verypetpurpose of subsequent recombination so that the heroticisms, catastrophes and eccentricities transmitted by the ancient legacy of the past" (p. 614) can be extracted out, manifested in endless multiplicity. Thus Joyce created a piece of art that contains everything that's ever happened and everything that will ever happen ("how minney combinaisies and permutandies can be played on the international surd!" p. 284).

As for the parallel many have drawn between 2001's black monolith and the iPhone.... well, Joyce already covered that one with the condensed single word "iSpace" (pg. 124).
Posted by PQ at 1:28 PM 4 comments: