Some observations on the Gate or Portal in Finnegans Wake I.3
Towards the end chapter 3 (book one) of Finnegans Wake, a drunken German angrily bangs at the locked gate of an Irish pub shouting threats and insults at the pub owner for locking him out after closing time. The gate Joyce places at the entrance of his main character HCE's pub is a megalithic stone structure, described as a "stonehinged gate" (FW 069.15).
I've been dwelling on the meaning of this gate in chapter 3. The door or portal is a recurrent image in the Wake. One of the many names used for the main character is Mr. Porter. The belligerent at the gate unfurls a litany of insults and nicknames at him including "Sublime Porter" (FW 072.02-3). That word porter has similar etymological roots to the word metaphor meaning "to carry across" like to carry across a threshold. I think that's relevant here because so much of the Wake and especially the part of the book I'm focusing on right now seems to speak in alternating metaphors.
The banging at the gate calls back to an earlier clash at a doorway in chapter 1 when the Prankquean rains hell on Jarl van Hoother (Earl of Howth) for locking the door of Howth Castle. The "stonehinged gate" on page 69 is "triplepatlockt" and on the adjacent page appears the Prankquean, "a shebeen quean, a queen of pranks." (FW 068.22)
George Cinclair Gibson's insightful study Wake Rites: The Ancient Irish Rituals of Finnegans Wake (University Press of Florida, 2005) discusses the "Banging at the Gate" scene as a parallel enactment of one of the ancient Irish rituals practiced at Tara. The actions of the verbal assailant at the gate, Gibson explains, "are the precise components of the Druidic curse known as the glam dichenn. The most compelling of all ritual curses, the glam dichenn would have been directed at a disgraced leader or failed king and delivered only by a powerful Druid." (p. 123)
As for the location of this scene, Gibson notes:

...the glam dichenn directed against the fated king of Tara is purposely delivered on a threshold. In Druidic tradition, threshold and liminal locations are the optimal loci for harnessing and generating magical power. Liminal locations---for example, 'the threshold separating the inside of the room or house from the outside world'---can be utilized by a Druid as 'the source of extraordinary powers because the liminal transcends normal distinctions between separate categories" (Nagy, "Liminality," 135-36).  A Druid would use these liminal places (for example, near a door, on the boundary between civilization and wilderness) to create a magically charged "atmosphere" in order to "help generate the power necessary for ritual" (Nagy, "Liminality," 138).

The "threshold and liminal locations" which Gibson says "are the optimal loci for harnessing and generating magical power" represent a junction point where worlds intersect. The door in Finnegans Wake is a threshold wedged between the world of wakefulness and deep sleep. The book itself is also represented like a door or gate, the sigla Joyce uses for the book is a square ▢ a type of portal. I think the gate also represents a portal to the afterlife or the underworld, chapters 3 & 4 feature numerous references to the underworld journey of the dead in the Egyptian Book of the Dead.
The description of the gate on page 69 includes an odd textual quirk where a capital letter appears unexpectedly with "There" in the middle of a sentence: "Where Gyant Blyant fronts Peannlueamoore There was once upon a wall and a hooghoog wall a was and such a wallhole did exist." The gate, or hole in the wall, is fronted by two giant pencils---"Gyant Blyant" includes the Danish word blyant for "pencil" and "Peannluemoore" is phonetically Irish for "big pencil"---even within the sentence itself, before we get to the gate we first encounter two giants fronting or guarding it. These "faithful poorters" (FW 069.26) are akin to the doorkeepers at Tara, named Camellus and Gemellus, who are directly named later on in the next chapter when the gate incident is re-litigated (see p. 90). Since they are described here as two giant pencils, it would appear these twin guardians of the gate are like two big obelisks. The obelisk is another recurrent image in Finnegans Wake usually representative of the obelisk at Wellington Monument in Phoenix Park, but here since there are two pencils or obelisks it could be invoking the original Egyptian style of placing a pair of obelisks at an entrance way.
This insight about the Egyptians using obelisks in pairs to create a portal between them came from a FW reading group discussion over this chapter last year. Architecture professor and Joyce scholar Marcin Kedzior shared this information with me:

Obelisks were always raised in pairs in keeping with the Egyptian value of balance and harmony; it was believed that the two on earth were reflected by two in the heavens. Egyptologist Richard H. Wilkinson writes:
"The phenomenon of duality pervades Egyptian culture and is at the heart of the Egyptian concept of the universe itself. But rather than focusing on the essential differences between the two parts of a given pair, Egyptian thought may stress their complementary nature as a way of expressing the essential unity of existence through the alignment and harmonization of opposites - just as we today might use "men and women", "old and young", or "great and small" to mean "all" or "everyone" (129)."
(from here: https://www.ancient.eu/Egyptian_Obelisk/) 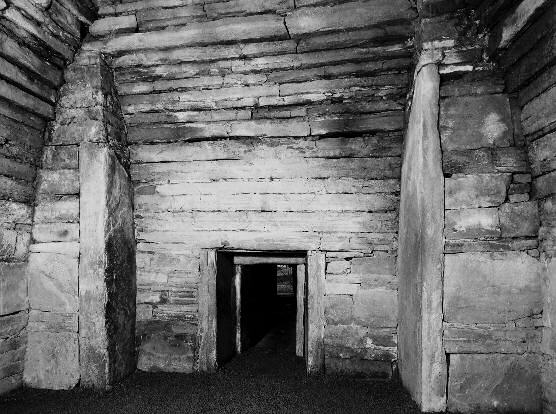 Even though the text says of HCE within his intricate stone tomb that "he med leave to many a door beside" (FW 073.28), the persona of the man asleep is hard to find. He seemed to say goodbye to his angry assailant right before traversing the portal, crossing over into time-bending dimensions on the other side lightyears away, he "proceeded with a Hubbleforth slouch in his slap backwords... in the directions of the duff and demb institutions about ten or eleven hundred years lurch away in the moonshiny gorge of Patself on the Bach. Adyoe!" (FW 073.18-22) All that's left for us to examine is the increasingly ornate megalithic structure, "skatterlings of a stone" (FW 073.34) forming an "eolithostroton" (FW 073.30). Now separated from HCE by time spans in the thousands of years we become archeologists trying to develop "a theory none too rectiline of the evoluation of human society and a testament of the rocks from all the dead unto some the living." (FW 073.31-33) And then Joyce ends the chapter on the following page with pretty clear indications that the main character has now fallen into deepest sleep.
In describing the sequence of events from this part of the Wake, John Bishop emphasizes that this all "seems to have to do not only with HCE's disappearance from consciousness, but also with his physical 'arrest,' his immobilization in the world of night; while in chapter 4, a significant turning point in the book, a process of 'disselving' and dispersion begins, as HCE fades from central focus into a remote background." (p. xx, Penguin edition of FW) In chapter 4, we once again encounter some references to Egyptian pharaohs buried deep inside pyramids, HCE's coffin becomes like a torpedo or submarine transporting through an "underground heaven, or mole's paradise" (FW 076.33). Further within chapter 4, HCE officially becomes no longer a somebody but an everybody, on page 88 he is named "Here Comes Everybody" with each letter representing the name of some historical or mythical figure.
By the end of chapter 4, where there was once a person now there is only an increasingly ornate stone structure, envisioned with "beaconsfarafield innerhalf the zuggurat" (FW 100.19). Maybe HCE is now the illuminated inner half of a ziggurat. He's no longer an entity but a geometrical structure, confirmed by "the canonicity of his existence as a tesseract." (FW 100.34-35) By the following chapter he has truly become a megalith, where the "trilithon sign M" (FW 119.17) is a fallen letter E meant to look like a trilithon.

FW 119.17
This evolution of HCE into a gateway portal built of stone that is also an elaborate "eolithostroton" (FW 073.30) or ziggurat or tesseract entombing him reminds me of a Gopuram, the monumental and ornate entrance tower to a Hindu temple.
This transformation of a seemingly human character into a ziggurat or tesseract stone tumulus is weird and confusingly abstract, but bear in mind that structure is also a gate or door and Joyce repeatedly hints at having dropped keys for the reader. One of these keys might be the aforementioned trilithon sign formed by rotating the E sigla for HC Earwicker, and that seems to be hinted at on page 100 with "tristurned initials, the cluekey to a worldroom beyond the roomwhorld" (FW 100.29). Bear in mind too that the wedge in the aforementioned "wedgewords" and "langwedge" is indicative of the keystone in architecture. So much of what all this is saying seems to be commentary on Finnegans Wake itself, Joyce's own history of the world thru the experience of one person asleep at night, the reader being led on an archeological dig thru the history of the human body and human experience.
That amazing line on page 100 depicting lit up ziggurats, "beaconsfarafield innerhalf the zuggurat" conjures in my head a very similar image as that provided by the recently deceased poet Lawrence Ferlinghetti (himself a Joycean) at the end of his epic poem Time of Useful Consciousness (2012): "Macrotiendas in Teotihuacan/ The pyramids lit up like cupcakes." The below picture shows me sitting atop a ziggurat pyramid structure staring down the Avenue of the Dead in Teotihuacan, Mexico, with a James Joyce shirt on my back. 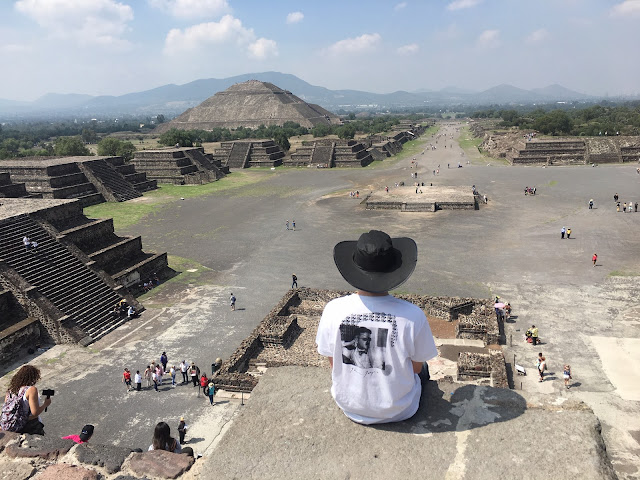 Exploring that ancient site of a complex pyramid city that was abandoned thousands of years prior, I couldn't help but think of Joyce and Finnegans Wake and the way he designed his book. The tour guide described how archeologists discovered buried remains underneath each of the ziggurat temples, they even found an "underground heaven, a mole's paradise" deep underneath the main ziggurat/pyramid, a series of tunnels decorated with gems to create the atmosphere of a mythical underworld amidst the stars.
Joyce when he was finishing up writing Finnegans Wake worried that his highly complex masterwork might end up being neglected and abandoned. "Perhaps it will end in failure, be a wreck or ‘catastrophe’ ...and perhaps in the years to come this work of mine will remain solitary and abandoned, like a temple without believers." (Portraits of the Artist in Exile, p. 160-161, my emphasis) I think the Wake will always maintain the aura of an abandoned temple ripe for archeological exploration, but with Finnegans Wake group digs taking place all over the world and even assembling virtually via "Bangen-op-Zoom" (FW 073.26-27) amidst a global pandemic just like ours did, the great temple site has not remained solitary and the gems and treasures yielded from these group digs are invaluable to an appreciation of what the human mind is capable of.

"So you need hardly spell me how every word will be bound over to carry three score and ten toptypsical readings throughout the book of Doublends Jined... til Daleth, mahomahouma, who oped it closeth thereof the. Dor."
(FW 020.13-18)

(Thank you to Marcin Kedzior, Madeline Melnick, and the Austin Finnegans Wake Reading Group.)
Posted by PQ at 3:13 PM 2 comments: