It's often said of Finnegans Wake that it is a book for the ear, that it's meant to be read aloud and experienced through the dimension of sound. Yet there are also plenty of episodes that feature thoroughly described visuals and when reading some of the vignettes---like the Mookse and the Gripes or the Ondt and the Gracehoper---one can't help but try to form a mental image of the characters.

When it comes to visual description, I'm especially fond of the scene at the opening of the "Yawn" chapter (Book III, Chapter 3) where the sleeping giant Yawn is approached by four chroniclers (and their donkey) who become mountain-climbing archeologists. Ascending up his unfathomably huge body, "they hopped it up the mountainy molehill, traversing climes of old times gone by of the days not worth remembering." (FW p. 474)


The supine, snoozing Brobdingnagian body of Yawn is envisioned in beautifully poetic if immense and absurd proportions:


"There he would lay till they would him descry, spancelled down upon a blossomy bed, at one foule stretch, amongst the daffydowndillies, the flowers of narcosis fourfettering his footlights, a halohedge of wild spuds hovering over him, epicures waltzing with gardenfillers, puritan shoots advancing to Aran chiefs... The meteor pulp of him, the seamless rainbowpeel... His bellyvoid of nebulose with his neverstop navel... And his veins shooting melanite phosphor, his creamtocustard cometshair and his asteroid knuckles, ribs and members... His electrolatiginous twisted entrails belt." (FW p. 475)


With its layered meanings and opaque, obscure prose, any visual representation of the content of Finnegans Wake will of course be entirely dependent upon the interpretation of the artist. Here are some of these illustrative interpretations I've come across. 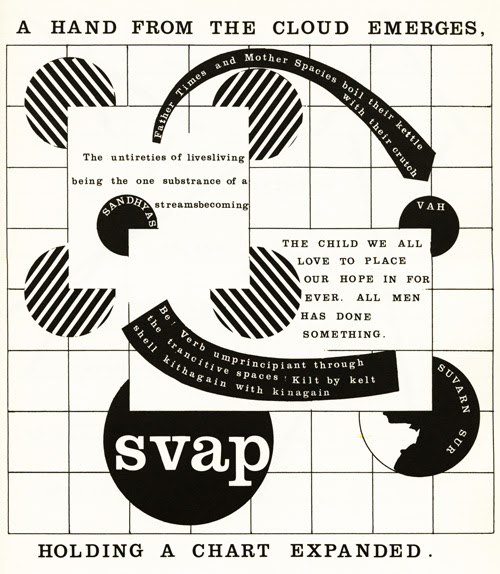