A Multimedia Examination of "The Mime of Mick, Nick, and the Maggies"

As the massive glittering galactic dream of Finnegans Wake proceeds along, its universal sleeper falling deeper into unconsciousness, the book's content becomes darker, denser, deeper until we reach the most difficult (and multi-allusive) chapters at the very center. As dawn grows nearer, the book grows a little bit lighter until the gorgeous poetic prose of the early morning hours represented in the final chapter.

The first chapter of Book II sets off a stream of difficult but resplendent material with a detailed playbill for "The Mime of Mick, Nick, and the Maggies" (p. 219) featuring all of the book's characters putting on a show in the "Feenichts Playhouse". The play revolves around the children of the book: Mick (the twin brother Shaun representing the Archangel Michael), Nick (twin brother Shem representing Lucifer or the Devil), and the Maggies (little sister Issy and her friends, representing the colors of the rainbow). The playbill promises to enact "a Magnificent Transformation Scene showing the Radium Wedding of Neid and Moorning and the Dawn of Peace, Pure, Perfect and Perpetual, Waking the Weary of the World" (p. 222), a sentence which sounds like a promotion for the Wake in its entirety.

This so-called "Mime" show is really the enactment of a game that the children are all playing, a guessing game in which the boys take turns trying to guess what color panties the girls are wearing. In a letter to his patroness, Joyce explained it this way:


'The scheme of the piece I sent you is the game we used to call Angels and Devils or colours. The Angels, girls, are grouped behind the Angel, Shawn, and the Devil has to come over three times and ask for a colour. If the colour he asks for has been chosen by any girl she has to run and he tries to catch her. As far as I have written he has come twice and been twice baffled. The piece is full of rhythms taken from English singing games."

The chapter was originally published by itself in book form in 1934 with a sharp, surreal piece of cover art drawn by Joyce's daughter Lucia. 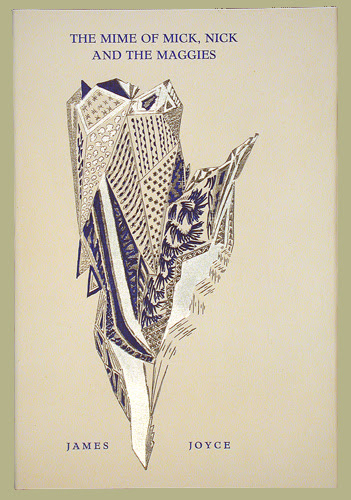 Among the Wake's 17 chapters, it's one of the densest despite its playful, musical flow. On the surface level, the narrative level you might say, it's supposed to be an enactment of children playing a game, but as always with Joyce and the Wake, there are a multitude of things going on. John Bishop writes a lot about this chapter in his excellent Book of the Dark, seeing it as the battle between the daytime rational conscious mind trying to awaken the sleeper out of his dark unconscious dream state, little globular rainbows flickering in his eyelids. But there's sooooo much more to it than that. At this stage in the family evolution of the Wake, the growing children begin to realize their sexual maturity and eventually overtake the parents to start their own new families. So, as with so much of the Wake, there's an underlying sexual element present.

A new multimedia interpretation by one Orlando Mezzabotta explores the sexual implications of Shem's guesses to the children's riddles in a unique and eye-opening way. Take a look at Orlando's YouTube video going over his interpretations, narrated through his own dramatically mysterious Italian-accented voice: