As this brand new blog continues to take shape, a sidebar filled with links to great material on the Wake throughout the Web has now been added. Here is an overview of what these links are all about.

Joyce Reading ALP
This is a must for anyone thinking of taking a dive through the pages of FW. From 1929, this recording features James Joyce himself mellifluously reciting the final three pages (p. 213-216) of the watery ALP chapter, the chapter on which he was "prepared to stake everything." About these pages, he once wrote, "either the end [of this chapter] is something, or I am an imbecile in my judgment of language." James Stephens called it "the greatest prose ever written by a man."

FW full audio
Unfortunately, Joyce himself only ever recorded those few pages above, but a few people have recorded this most aural of books in full. Dublin-born Patrick Healy has a particularly interesting angle to his reading (available at UbuWeb in its entirety for FREE), I was especially intrigued by his rendition of the "Night Lessons" chapter (p. 260-308) which features footnotes and marginal scribbles on every page. When I recently read the Wake cover to cover, this audio reading was absolutely essential to the experience.

FWEET (search engine)
Another essential link to anyone embarking on a reading of the Wake. This search engine contains the entire text with notes of the references/allusions/foreign words/etc contained in each line. All of Roland McHugh's Annotations to FW are here in electronic form. It's an incredible experience when, after reading the pages, one goes back and combs through the intricate sediments of the prose to notice how many hundreds of different meanings are contained, mostly via puns from various languages. FWEET will certainly be a major factor in the text exegesis I plan to do on this blog. Though, do keep in mind, there is so much FWEET has missed or just doesn't include (for various reasons). The actual mass of meanings/allusions/references/etc is many magnitudes larger than what FWEET contains. Still, a great resource. (Just make sure you tinker with the search settings, the default settings are screwed up.)

The Joyce of Science: New Physics in FW
This is a great study of all the modern physics included in the Wake (including things that weren't discovered yet), written by Andrzej Duszenko and posted online for free.

Wake in Progress
One of the few regularly updated pages devoted to the Wake, this one is a true gem. Artist Stephen Crowe has taken on the task of illustrating each page of Finnegans Wake one by one. As each page is completed, he posts them here at his blog. He also writes reflections on the book as a whole. Really great site. 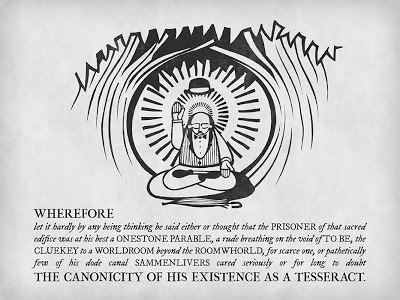 Venice Wake
This is the homepage for the long-running reading group in the Los Angeles area devoted to both Marshall McLuhan and Finnegans Wake. When I was living in California, I had the chance to attend two of their meetings over in Marina del Rey and had a great time. They attract a large and diverse crowd and have been studying the Wake for something like 17 years now. My own Wake reading group here in Austin is built upon their format of approaching the text.

FW in Santa Cruz
Another reading group I had the pleasure of partaking in, these guys meet at an Irish pub in the glorious city of Santa Cruz, California. It's another one of the few webpages that are updated regularly with good material on FW.

A Word in Your Ear
This is the homepage for Eric Rosenbloom's book of the same title (subtitled How & Why to Read James Joyce's Finnegans Wake). Here he's got plenty of great resources including excerpts from his book and numerous other Wake-related essays, among them a full study of Joyce's use of Egyptian rites and the Book of the Dead, and essays from one of the more colorful and brilliant Joyce commentators known as the Riverend Clarence Sterling.

Again! Again!
Definitely the best title to a Wake study I've ever seen, this is the entirety of Peter Nigel Best's book-length meditation entitled Again! Again! Again! Again! The mighty maze of human being and the freeing of conscience: James Joyce's whirling mandala or The great Finnegans Wake game. As the title suggests, this is a very eccentric and long-winded approach to analyzing the text but it's a great read because of Best's passion and broad network of references.

McLuhan on Joyce
Just a page displaying the Joyce quotes from McLuhan's entire corpus. Here is McLuhan comparing LSD to Finnegans Wake on television in 1967. "LSD may just be the lazy man's form of Finnegans Wake."

RAW on FW
One of my favorite things on the internet, this is an interview with the late philosopher/science-fiction writer/guerilla ontologist Robert Anton Wilson entirely devoted to discussing James Joyce's masterpiece. Includes full transcript. Thanks due to the amazing folks at the Only Maybe blog for this gem. At the very end, Wilson recites a couple of his favorite passages.

Joseph Campbell on Joyce
Once again via the Only Maybe blog, this includes audio from a few Joseph Campbell lectures devoted to each one of Joyce's novels. It was Campbell who originally led me to Joyce, his passion for this kind of stuff is infectious.

Terence McKenna on FW
The eminent and eloquent ethnobotanist Terence McKenna discusses the Wake (and McLuhan) at length in this YouTube clip. While I love this lecture of his, he does get a few key elements of the book incorrect.

FW index
A handy index for the entire book. Can glean some interesting insights from seeing which words are used most often in this massive encyclopedic text. For instance, the word "help" appears over 30 times throughout the book. The word "poor" appears more than twice as often. In the mass lexical shitstorm of the Wake, what words appear more frequently than others? Very interesting to consider.

Joyce Papers at Modern World
Tons of great stuff here. While some of the links are broken, there are many, many great studies contained here covering the whole corpus of Joyce's work. In this batch are a few of the more intriguing Wake papers I've ever read, covering the electronic-hypertext-futuristic element of Joyce's uncanny book. As an example of those, here is a study by Donald Theall entitled "THE HIEROGLYPHS OF ENGINED EGYPSIANS: Machines, Media and Modes of Communication in Finnegans Wake."

Genetic Joyce Studies
Another house of papers, this is a free publication of "genetic" studies, that is, studies focusing on how Joyce's works were developed. As you might imagine, there is lots of interesting Wake stuff here. The papers are rarely anything but lengthy and painfully thorough, though, so be warned.

JJ Scholar's Collection
An excellent resource here, this page features a number of Joyce books in their entirety for free. A few of them are out of print and hard to find in physical form. Included here is one of my favorite studies of the Wake, Bernard Benstock's book Joyce-Again's Wake.

FW FAQs
Organized in a strange, mishmash fashion, this page includes FAQs aimed at some of the most renowned Joyce scholars, all concerning the Wake.

The Finnegans Wake Society of New York
Unfortunately, my Wake study only began once I moved out of New York so I haven't gotten to experience this group yet but these folks have been meeting for a very long time. Their site also features a directory of Wake reading groups worldwide.
Posted by PQ at 3:59 PM

Email ThisBlogThis!Share to TwitterShare to FacebookShare to Pinterest
Labels: links