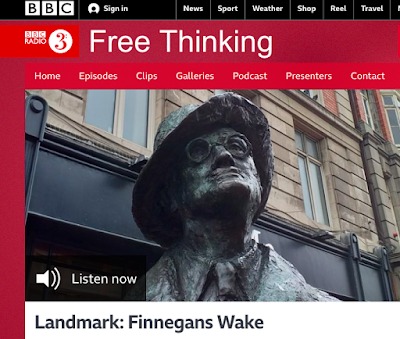 To commemorate Bloomsday this year, the BBC radio program "Free Thinking" devoted a whole episode to discussing Finnegans Wake. I was pleasantly surprised at how great this discussion came out. The show features host Matthew Sweet discussing the historical facts and notorious idiosyncrasies of Joyce's final novel with Joyce scholar Finn Fordham, novelist Eimear McBride, and lecturer Eleanor Lybeck. They toss out favorite individual words from the Wake, speculate on why it was written in such an obscure language, collectively savor the book's unique delights, and read a few passages aloud. Most fascinating to me about the discussion is Finn Fordham's insights, as he's one of the premier Wake scholars in the world today and an engaging speaker. I was thrilled that he chose to recite the atomic explosion passage from the Butt & Taff episode at the heart of the text. That's about as rich and silly yet scientific and prescient a passage as you will find in Finnegans Wake.

On that note, I must admit that I was thunderstruck upon hearing the host bring up the I-Ching in relation to Finnegans Wake because I just presented my paper entitled "Binaries & Bibliomancy: Finnegans Wake as the Western I-Ching" at the annual Joyce Symposium in Mexico City a few days prior to the program being released. Not that there's any causal connection there, of course, it just struck me as a synchronicity that took on even more significance when Finn Fordham responded to the host's inquiry by dismissing the notion that Joyce designed the book to have oracular powers.

I can tell you that I am very, very excited about the material in my "Binaries & Bibliomancy" piece and I can't wait to share it with you all. I've been researching this subject for a few years now and spent six months writing the paper. The Wake & I-Ching have been strange bedfellows for a while but I found some fascinating concrete links between the two as well as myriad resonant echoes that enrich Joyce's text. The presentation I gave in Mexico City received some stunning responses from those in the audience, many of whom were veteran Joyce scholars. I am currently in the process of finalizing the paper (which contains more than double the material I shared in the presentation) to try getting it published somewhere. In the meantime, if you'd like to check out my presentation I will share a link of a video of the talk after the jump below.